1. Completely scene and prefab independent referencing of data and events. Player data, game manager states, pretty much anything can be shared across scenes and prefabs with this SDK.
2. All data is serialized natively by Unity and can easily be exported to JSON. Data can also be imported back into ScriptableObjects from JSON. This can be very handy for adding support for custom player levels, maps, or even just saving player data quick and dirty like.
3. Entire games can be made purely by using the SDK as is. Unlike visual scripting tools that aim to completely migrate the game development flow into a visual scripting interface, SOFlow attempts to blend with Unity as is.
4. A fully debuggable Game Event system. Since a lot of functionality is now directly linked to data assets and Game Objects, it can become difficult to debug when things go wrong. I have made my best efforts to alleviate this with bug tracking for Game Events right inside Unity. And at times when we need to get down and dirty with code, hyperlinks to the code in question are available as well.
5. Customize the look and feel of most inspectors. All components that do not have a dedicated Custom Editor will automatically use SOFlow to display their contents.
6. A wide variety of useful components always coming to the SDK. The SDK is ever-evolving, but each new features will maintain the same general workflow encouraged by SOFlow.

One of the foundations of the SDK. Other components in one form or another build upon what is known as Primitive Data Types. Theoretically, one could create an infinite number of Data Types supported by the SDK. The SDK itself provides the most commonly used Data Types ready to be used within projects as illustrated below:

So what are Data Types exactly?

They are containers for different types of data. The data they store is normally data stored exclusively within components used within scenes. This exclusivity makes it cumbersome, and at times difficult, to interact or share the data with other components. Storing this data within containers instead allows for far greater flexibility and provides immediate independence from scenes.

The containers come in the form of files stored within the project (ScriptableObjects). These containers can then be used by other components in a variety of ways. One example is the Data Text Setter component, which takes any arbitrary Primitive Data Type and displays the current data within the container in a TextMesh Pro Text component:

It is sometimes desirable to keep exclusivity of data on a per scene/component basis. Primitive Data Types can be used for both cases. Each data type comes with a native ability to toggle between using data containers or using exclusive values:

NOTE: Using the Primitive Data root class as a variable does not support toggling between data containers and exclusive values, as there would be no data defined as exclusive values.

Another one of the foundations of the SDK. Not to be confused with UnityEvents or UltEvents. Game Events act as messengers between components. That is essentially their only purpose. Though as dull as that may sound, it is actually their most powerful (if only) feature. Game Events work together with Game Event Listeners, who act as receivers of the messages carried by `Game Events`. A short breakdown of what this means for us:

1. We choose when to send out a message.
2. Game Events ensure our message goes out to all interested components.
3. Game Event Listeners receive the message and lets us know the message has arrived.
4. We decide what to do after having received said message.

To demonstrate this concept, let's use the previous example with setting text to some data. Previously, we had to enter Play Mode for the text to update. This time, we can simply send out a message to say when the text should be updated:

Game Events can also be dragged directly into a scene and will automatically create an associated Game Event Listener:

Messages can be sent directly through code by exposing a GameEvent field, then calling MyGameEvent.Raise(). My preferred method, and one the SDK encourages, is to send messages using UltEvents (or UnityEvents if UltEvents are not available).

UltEvents are a wonder on their own. Think of them as severely overpowered UnityEvents. If you are unfamiliar with either UnityEvents or UltEvents, I highly suggest checking them out.

UltEvents can serve an large number of purposes, and for the SDK, they provide the perfect interface to create interactions between Data Types and Game Events.

In the example below, a Comparison component uses UltEvents, one for if what is being compared for matches, and another if the comparison does not match. In our case, when the comparison matches, we send off our example message:

Even in the safest of project environments, things can and eventually will go wrong. When they do go wrong, it's always great to have a tool or two handy to figure out what went wrong. That is the main goal of the Game Event Log. The Game Event Log keeps track of all Game Events that send messages during a session. It will color code Game Events based on what happened when they sent their messages. The coloring will depend on your individual color settings for the SDK. For me, green means everything went smoothly, and red means an error occurred with that Game Event.

The Game Event Log itself does not track exactly what went wrong, instead the Game Events themselves keep their own logs of what happened during each message they have sent. If an error occurred when a message was sent, we can check the logs within the Game Event to see exactly what the error was, and if necessary, navigate straight to the line of code that caused the error.

Below is an example of both the Game Event Log and Game Event error logging in action:

Each feature listed here will have example scenes and assets explaining and demonstrating how they work within Unity itself. These examples can be found under: Assets/Code/Scripts/SOFlow/Examples

This is a legit Scriptable Object System. Loving it. I am busy making my own. Kinda more Light Weight Event Pipeline. This is more like your High Definition Event Pipeline. Well done bro. 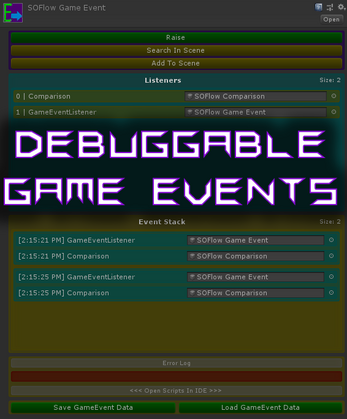 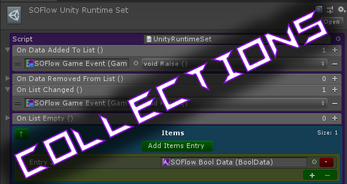 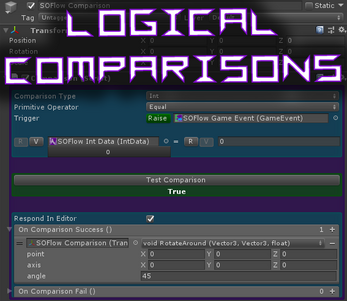